So, probably like a lot of you, I was pretty skeptical about the whole minimalist shoes thing. Apparently a lot of people think Vibram Five Fingers are “gross”, “disgusting”, or “give me the skeevies when I see people wearing those!” I don’t get that at all, but I’ve heard it a number of times. Not in regards to my own shoes – I don’t have a pair. I kinda wish I did but I doubt they’d fit my wide feet right and, even if they did, I’m a ‘one pair of primary shoes’ guy – I like to have one pair that I put on in the morning and don’t take off all day, which includes work, exercise, play, hanging out, etc. I typically work from home or out of the local Starbucks, but most days I do go into the company’s office to attend an in-person meeting or two. And walking in there with Vibram Five Fingers would probably not be a good idea. It’s a fairly progressive culture (though seemingly quickly regressing lately…), but not that progressive. I’d quickly become “that goofball with the toe shoes.”

About six weeks ago, after wanting something Vibram-like for quite some time, I was determined to just get a pair. I looked online but with my wide feet, typically requiring a 2E width, choices are slim and trying them on wouldn’t be an option. I narrowed the choices down to: 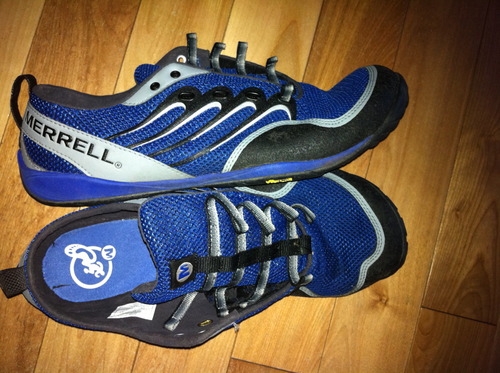 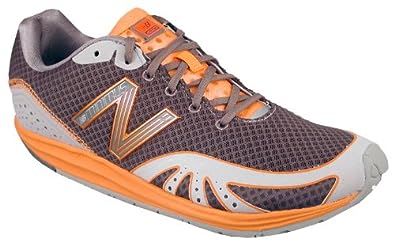 I wound up purchasing the New Balance ones because they were in stock at my local mall’s New Balance shop, and they were on sale. As is usually the case, they didn’t have my size. Why is it so hard to find size 10.5 or 11 2E? I wound up going with the 11.5 size they did have. They are too long, but fit pretty darn good.

I have to admit…the first couple of weeks these shoes weren’t all that comfortable. I would put them on in the morning, just to walk around and wear them during the work day (my work day does not include doing anything physically demanding aside from sitting in a chair and typing on a laptop). By the end of the day my feet would ache a bit and, if I left them on all day I found that my feet felt ‘sprained’ for lack of a better description. Not good. Not horrible though – not so much that I wanted to ditch them. But not as comfy as the Brooks running shoes I was wearing for the last year or two, which are as anti-minimalist as you can get, with a big ass heel height. They’re like stilettos for runners.

I’d been thinking it was time to ditch the shoes and just admit that minimalist shoes weren’t for me, when I had to run to a CrossFit session and forgot to change to my Brooks before leaving the house. I wasn’t concerned because that day’s WOD was the bench press so I figured not much on my feet. I was wrong – the warm-up started with an 800m jog. Fortunately for me, it truly was a jog – the rest of the athletes didn’t bust out and sprint it like they usually do and, in fact, for the first half I led the pace which was cool. And halfway through it hit me – I’m running easier and more comfortable than I ever have. It felt good. My feet felt great. Must be the shoes! : )

Truth be told, I did notice that my feet were getting used to the minimalist design the week of that workout, and since then my feet have been feeling stronger, and the shoes are now downright comfy. I’m not going to bother putting on the Brooks anymore and will continue to use these.

Would I buy them again? No. As much as I really am starting to love the feel of minimalist shoes, I don’t particularly like the looks of these New Balance ones. The heel is abnormally fat in the center, which is in keeping with the minimalist design but looks a little like those goofy ass Skechers ‘Shape Ups’. I will however definitely stick with minimalist shoes going forward. So I’m going to keep going with these for another month and then, if all continues to go well, order some new ones with an even thinner heel. Who knows, by then I may throw caution to the wind and go with the Vibram Five Fingers!

I have NOT run long distances with these shoes yet. I plan on trying that within the next few days, but I am a horrible runner and 800m is actually a pretty far distance for me without stopping, so I am confident that these shoes will work for longer distances without causing any issues.